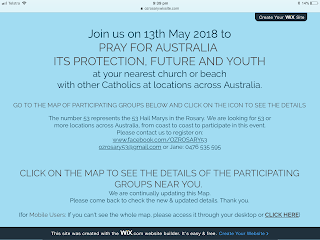 A National Rosary Campaign  was launched in May by a group in Sydney which includes former Sacred Heart Cootamundra teacher, Jane Chifley.

On the “Oz Rosary” website, he credits Polish Catholics for having begun the now worldwide national Rosary crusade.

“I am a retired Auxiliary Bishop of Sydney, and I am more than happy to support the Oz Rosary Around Australia,” Cremin wrote. “This Rosary Crusade started in Poland with over a million Catholics and has spread to other countries. It is very much a lay initiative and a most devoted lay team are promoting it here in Australia.”
“I support very much this good apostolate of promoting the Rosary at this time when there is so much poverty (and) bloodshed and refugee problems in our world,” Cremin continued. “Our Blessed Lady’s intercession through the recitation of the Rosary is sorely needed at this time.”
The Australian prayer event was originally called “Oz Rosary #53”, as its organizers hoped to establish as many as 53 locations, one for every “Hail Mary” of a five-decade Rosary. However, now more than 200 locations have been confirmed.
While the promotion and response is dominated by those in traditional parish and school communities I invited Catholics and friends who no longer associate or identify in this way to also have an opportunity to witness to this model of popular devotion.

On Sunday 13th May I went on a rosary pilgrimage to reflect on our country, its needs and our mission. I took the highlighted words of Bishop David Cremin's message as a focus. This pilgrimage began  at 3.00 pm at the Sorry Day Plaque in King George Square and concluded at  5.00pm, at sunsetat the entrance to the Botanic Gardens in Alice Street.
Venues 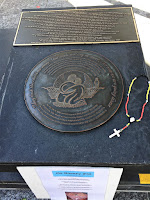 
Reflection:  And the Church herself in Australia will not be fully the Church that Jesus wants her to be until you have made your contribution to her life and until that contribution has been joyfully received by others. 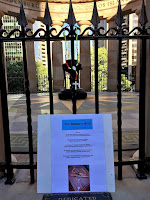 2nd Decade for Peace and Nonviolence
3.30pm: Anzac Flame Ann Street
Reflection: For Christians, Jesus Christ is the strongest example and source of strength in our long journey towards the peace of God. He was the victim of the worst that humanity could do. His response to violence was not more violence but an act of transcendence that set humanity on a new path forever. The mission and resurrection of Jesus are both a message of hope to humanity and a call to conversion: to renounce the sources of violence and to look for new and constructive ways of addressing the pain and anger we see in our world.  2010: Violence in Australia,  Australian Catholic Social Justice Council

Reflection: People who come to Australia claiming protection are not aliens, but our brothers and sisters. If they cannot find protection in their own countries, they are entitled to claim it from other nations, including ours. 2015-2016: For Those Who've Come Across the Seas  Australian Catholic Social Justice Council 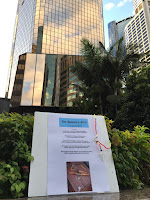 4th Decade for Human Rights and Economic Justice
4.30pm: AMP Place 10 Eagle Street Brisbane
Reflection: We see a vineyard in which all are engaged as active contributors to the economic enterprise. We are called to work for an economy that is inclusive and capable of putting the needs of the poor before the wants of the rich. We envisage an alternative to market places that are harsh and inhospitable: the vineyard, lush and green, sustainable in its growth and inclusive in its economy. 2017-2018: Everyone’s Business Australian Catholic Social Justice Council 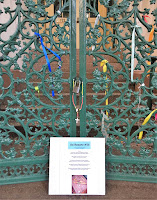 LOUD FENCE is a place to show support for those victims and survivors of child sexual abuse: tie ribbons to fences, letterboxes etc. NO MORE SILENCE.Prayer for survivors and deceased victims of institutional childhood abuse in Catholic institutions. 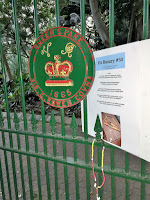 5th Decade for the Environment and Rough Sleepers in our streets and parks
5.00pm: Botanic Gardens Alice Street Gates
Reflection: Just as the commandment “Thou shalt not kill” sets a clear limit in order to safeguard the value of human life, today we also have to say “thou shalt not” to an economy of exclusion and inequality. Such an economy kills. How can it be that it is not a news item when an elderly homeless person dies of exposure, but it is news when the stock market loses two points? This is a case of exclusion. Can we continue to stand by when food is thrown away while people are starving? This is a case of inequality. Today everything comes under the laws of competition and the survival of the fittest, where the powerful feed upon the powerless. As a consequence, masses of people find themselves excluded and marginalized: without work, without possibilities, without any means of escape Evangelii Gaudium (“The Joy of the Gospel”), Pope Francis, 2013, #53. 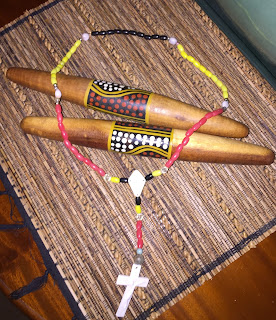 The COVID-19 pandemic has forced NATSICC to rethink the ways in how we empower Catholics to celebrate our special day. This year, we have modified our Aboriginal and Torres Strait Islander Sunday resources to work in a digital setting. We are also holding the first-ever live-streamed, Aboriginal and Torres Strait Islander Sunday Mass from the St Francis Xavier Cathedral in Adelaide from 11.30am EST. The livestream will be available from the NATSICC homepage.   We are inviting everyone around Australia - and the World - to join us on 5 July 2020, as we come ‘Together in the Spirit’ to celebrate the gifts of spirituality and culture. Resources Meet Cynthia Rowan Walking in Solidarity  Catholic Social Teaching On Indigenous Peoples 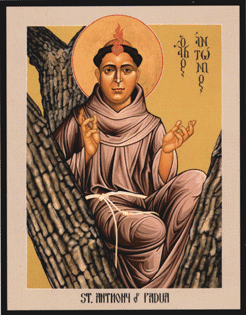 One of the significant days of this month is June 13th, my name  day. My parents made sure I would spend my life gaining easy and instant recognition as a good Catholic boy by naming me after St Anthony of Padua  whose feast-day falls on this day Now this saint should not be confused with the many other holy Anthonys who have front row seats in the celestial realm. My "Anthony" is a one of Catholicism's pin-up boys. He is  patron  for a number of a eternal chores that occupy most of his working days  In his spare time he poses for thousand of popular images and statues that adorn churches homes and religious houses. Somewhere along the timeline he also found time to star in a series of movies . My favourite is this classic from the silent movie era made long before the days inter-religious dialogue. : It's always good to remember that saints are often given to us to admire rather than imitate. Anthony was part of the weird and wonderful world of med