Third Day of Christmas: A Holy Day for Queers

on December 26, 2021
The third day of Christmas is the feast of St John. Popularly known as the evangelist and the "disciple whom Jesus loved", John is the author of a Gospel and the Book Of Revelation.


The Beloved Disciple reclined next to Jesus at the Last Supper, resting his head on Jesus’ chest. He was the only male disciple present at the crucifixion. From the cross, Jesus entrusted the Beloved Disciple and his mother Mary into each other’s care.
There is even a medieval European tradition that John and Jesus were the bridal couple at the Cana wedding feast. The story of Jesus' first public miracle  as told in  John 2:1-11 does not name  those getting married. In this feast there is a subversive undercurrent that invites us in the spirit of the traditional Christmas story to encounter humanity with open eyes and hearts. As we celebrate this feast in Australia we are called to add our recognition of same sex marriage to the angelic chorus of "Gloria in Excelsis Deo"
St John has a special place in my personal history. Two weeks after my birth in 1953 I was taken to the Church of Saint John the Evangelist in North Geelong  to be baptized by Fr Bernie Payne. My parents being of good Catholic stock chose two reliable male patrons for me in Anthony of Padua and Gerard Majella. Both died young and lived celibate lives as religious. I have outlived both of them in years and have  been blessed by a life of human intimacy. 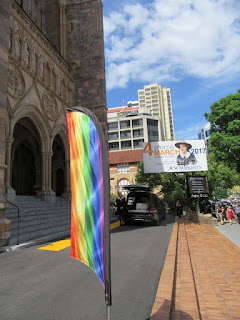 St John's Anglican Cathedral in Brisbane. is an intentional inclusion space  for LGBTIQ people. This welcome was most evident at the 2017 funeral service for Brisbane singer, Carol Lloyd.