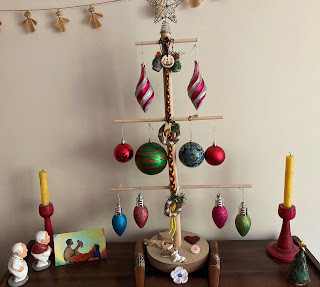 There are quite a few things I really like about Catholicism. It has nurtured in me a love of theatre and ritual in my life. The cycle of religious festivals with appropriate colours, symbols and texts provide a rich stimulus to imagination as well as feeding the never ending questions of life.
Christmas is, without doubt far more exciting than Easter. I know the liturgical police and the theological prudes will chase me through the corridors of fidelity for uttering such a heresy. But, let’s face it, cribs, carols, trees, candy cane and the spirit, if not the presence of St Nick all work together to provide a lot more excitement than an empty tomb. And we get 12 days to celebrate as well. I always use this as an excuse for sending Christmas Cards right up until January 6th. Wish someone would tell Australia Post about the 12 Days deal so we could continue using the Christmas stamps after December 31st
This year at  Casa Carina in lieu of the traditional nativity I have opted for a post-modern minimalist installation which I call "Just Christmas". It is a bare tree structure reminding us of deforestation and the impact of climate change on this planet we share as our common home. Along the spine and surrounding the base are the colours and clapsticks of Aboriginal nations acknowledging the country on which I live.
There are a few coloured items which I have collected over the past years and symbols of my commitment to living Christmas though the year.
At the top of the installation is a small symbol from  my L'Arche community  reminding me of my commitment to the adventure in human relationships  that happens when we share life as people living with and without intellectual disability.
Around the base of the installation I have placed a few mementos from significant conferences I have attended which have been formative in recent years. These include a small red heart from Catholic Missions. and a dove with the Franciscan Tau cross from the Franciscan School Conference 2019. The small badge with the lotus flower is the symbol for the Forgotten Australian network in Brisbane with whom I worked for several years. There is also a Unicorn, a medieval symbol of Christ, a white poppy for peace
The nativity image is the work of Maria Van Galen, a member of the Franciscan Missionaries of Mary who have been part of our family story.
The multicultural features include  the recent addition of a couple of papal  Caganers. With Catalonia  providing some of the more  passionate political news my Benny XVI and Francis Caganers bring  a contemporary feel to an ancient creche.
Out of view (as you would expect) are the Magi.. They are currently on the other side of the room  and will slowly progress to the crib to arrive on schedule for the Epiphany on January 6th. One year I was away and had an external Nativity. A neighbor took on the task of moving the “Three Kings” through the garden to arrive on time. I really think she ducked out late on the night of Jan 5th and gave them an express run through the shrubbery.

I feel sorry for the poor old “Three Kings”. They don’t really get to make much of an appearance as everything gets taken down and put away as soon as they arrive in accordance with a tradition handed down by my wise old grandmother.

So, I hope you are blest with friendship, compassion and solidarity with vulnerable people  on the 12 days of Christmas which take us into the New Year with its promise of joy and peace.
12 Days of Christmas Brisbane.Faith Cajaner Catalonia Christmas Church Faith Spirituality Religion