Reclaiming May in Catholicism

As a young boy I was fully inducted into my privileged state  in the Catholic Church. I was a altar server which meant I had access to the sacred in ways that my revered grandmother would never know .I was taught the ritual language of Latin and dressed in robes that marked me off from others in the Church.

The elite male caste of clericalism is one that can easily trap a young boy with religious interest ,imagination and dreams of adventure. Although I had my share of comic book heroes, some of whom were military monsters, I also read of the martyrs and wonder workers of my faith tradition who ranged from the hard working to the eccentric. Few of these stories were of women whether  in comic books or biographies of saints.

I spent a number of years as a young adult within this culture of male clericalism. I learnt much from this  experience. My choices meant that I lived in a  multicultural religious community of men. This nurtured a new appreciation of cultural diversity that has stayed with me since. It also gave me insights into masculinity that have led me to a new understanding of my sexuality as a gay man.

My passion for social justice led me to an awareness that at the core of my life was a deep injustice both personal and systemic. It was an injustice deeply rooted in the very culture I had taken on board as my source of meaning and fulfillment.

Patriarchy is the elephant in the room of Catholicism and much of Christianity. In my younger days I took it for granted that males had rights and privileges. When I was a young altar boy there was one Sunday in the year when girls took centre stage in the Church.

The annual crowning of Our Lady's statue was a high  religious festival in May. It involved  flowers, lyrical songs and young girls dressed in white strewing rose petals on the nave of the Church, There was even a "WHS" factor ignored at the time, when one  special girl in full white wedding gear had to climb a ladder to place a wreath of flowers on the head of the Fatima  statue. Many observers would see the day as a bit of Goddess worship Catholic style where women had their  15 minutes of religious fame. But after all the processing and drama of the crowning we went back to hearing a male priest tell of the glory of Mary.

In  2012  the NCR has published one of the best pieces of writing I have ever read by Sr Joan Chittister: Silence about the global treatment of women is disquieting. She concludes this item with this call:

From where I stand, it seems to me that male "protection," paternalism and patriarchal theology are not to be trusted anymore because the actions it spawns in both men and women have limited the full humanity of women everywhere, and on purpose.

Isn't it time for us all to really be converted, to say the real Truth about women from our pulpits, from our preachers, from our patriarchs, until both they and we finally believe it ourselves? Then surely the actions that make it real will follow.

I am all for keeping May as a month of "woman awareness". I believe we should rediscover the mythology and person of Mary of Nazareth in our day. My preferred text for such an approach is Marina Warner's "Alone of All Her Sex: The Myth and Cult of the Virgin Mary". It speaks with far more religious and feminine insight the Louis de Montfort's True Devotion to Mary. 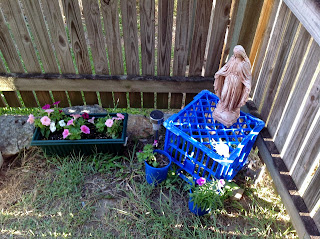 I have  my own Marian Shrine in the front  garden. "Our Lady of the Milk Crate" is a local devotion inspired by the appearances of Mary at Coogee Beach. Readers may be surprised to know that the Virgin Mary had made an earlier visit to Coogee in 1911 to a young woman, Eileen O'Connor who founded Australia's Brown Nurses.

May 13 is the Feast of Our Lady of Fatima. To honour this day I invite you to reflect on this message from  Cardinal Michael Fitzgerald MAfr

For Catholics Fatima always evokes the apparitions of Our Lady that took place at Fatima, in Portugal. This locality took its name from an Arabic princess, daughter of a Muslim leader who  became a Christian.

The original Fatima was the daughter of Muhammad by his first wife, Khadija. Fatima was given in marriage to Muhammad’s cousin, ‘Ali, to whom she bore two sons, Hasan and Husayn, who were both Imams after their father. Fatima is thus revered by the Shi’a who call her the “Mother of the Imams”. She is a woman of sorrows, of many tears, because her husband ‘Ali was not recognised as the rightful successor of Muhammad and was later assassinated, on account also of the martyrdom of her son Husayn.

A tradition (hadîth) is attributed to Muhammad according to which he said: “Fatima is foremost among the ladies of Paradise.”

In the Shi’ite tradition she is counted among the 14 Holy Ones together with Muhammad and the Twelve Imams, the only woman to be included. Yet she is not mentioned in the Qur’an, unlike Mary whose mother said of her:

I name her Mary and I commend her and her offspring to Your protection from the rejected Satan. (Qur’an 2:36)

Consequently, in fulfilment of this prayer, Mary and Jesus were untouched by Satan and remained sinless. To Mary the angels said: 'Mary, God has chosen you and made you pure. He has truly chosen you above all women.' (Qur’an 2:42) (Source: Christian-Muslim Relations)

My many women friends continue to challenge me into the full maturity of my masculinity. I recall with gratitude the women of global influence I have been privileged to meet or know online and through their writings. I honour the work of Dorothy Day, Jean Houston, Helen Prejean, Julia Cameron. Marina Warner, Janet McKenzie,   Mirium Therese Winter, Odetta, Sweet Honey in the Rock, Maureen Watson, Oodgeroo  Noonuccal  Mirium Rose Ungunmerr Baumann and so many more.