The Madonna del Roario exhibition was originally presented by the Wollongong City Council and the Wollongong Italian community in 2006. It takes its name from the Church of the Community of Falerno in Southern Italy. First generation migrants to Wollongong brought the local festival to the city and in 1991 installed a magnificent replica of the statue of Madonna del Rosario in the church of St John Vianny in Fairy Meadows. In 2006 the Wollo0ngong City Council hosted the inaugural Madonna del Rosario Acquisitive Art Award. The exhibition attracts work by some of Australia’s leading artists, jewelers, and designers who contribute diverse and unique representations of a popular Catholic devotion.


The Brisbane exhibition was launched in 2008 at  Artisan Gallery in Fortitude Valley and provided visitors with a graced opportunity to join artists and designers responding to the spiritual theme of the rosary. For local visitors to Madonna del Rosario there is the added attraction of the inclusion of work by several Queensland artists including Rachel Apelt, Madeleine Brown, Anna Varendorff and Ky Curran.
Setting Madonna del Rosario in a gallery with a shop-front display of attractive items for sale will remind many of an older Catholic generation of the piety stalls which were crammed into corners of churches all over the country. While many of the pieces in the exhibition are available for purchase, they are a world away from the cheap and mass produced icons of the Madonna which once graced the bedrooms of our mothers or sat on the fridge in a good Catholic kitchen.

Annabelle Collett’s heavy rosary of tiles, wood and stainless steel is a deliberate statement of the weight of religion and the grand scale of the Church. It reminds me of the beads I once wore as a Capuchin Friar during my young adult life. Sitting on a chord around my waist they were in fact a workplace health and safety risk and spoke more about my status as a “religious” member of the Church rather than the radical commitment to following the teachings of the Christ which inspired my original choice to join the Friars.
Throughout out the exhibition the theme of motherhood and the domestic appears in the materials and the images. Lace, pasta and even an mp3 player all combine to take the artist and the visitor into a sacred space which explores the joyful, glorious sorrowful and luminous experiences of life. Ky Currans’ shrine to the Madonna in 100 vivid icons evokes the Catholic images of Mary’s motherhood celebrated in titles and songs such as “Mother of Mercy”.

A visit to “Madonna del Rosario” is not a quaint retrospective on a forgotten tradition. It is an invitation to engage in the spiritual essence of life as relationship, journey and exploration. When the Italian Choir from Holy Cross Catholic parish in Lutwyche performed at the launch of the exhibition two worlds met in apprehension. As artists guests and visitors mingled and chatted the choir of ten women and three men struggled to be heard singing their traditional and much loved hymns to the Madonna. The exhibition was the choir’s first experience of singing outside a religious setting. Yet in conversation during the evening the memories of Catholic traditions in the “old country” were meshed with the current tales of another younger generation who have chosen a different expression of prayer spirituality and religious affiliation. The rosary mysteries of joy, sorrow, glory and light are the stuff of life across culture and generations.

This beautiful catalogue is a small treasure of information and background reading on the history spirituality and design of the rosary. The images and reflections from each of the artists make the catalogue another form of prayer book and mediation that will challenge and inspire long after visitors have left the gallery. 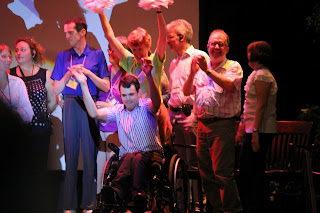