on December 28, 2021
Today the theme of martyrdom again dominates the liturgical calendar for those of us with English connections. Mind you some of those connections are traced to anecdotal stories of previous generations of faithful Catholics being driven from our Celtic lands by the religious zealots of the British monarchy.

Anyway, back to the stories of the day which are dominated by a couple of English Monarchs.. Henry 11 is the first English Monarch to have an Australian connection way back in the 12th century. His mum's name was Matilda and she waltzed around town as the Empress Matilda for a few years.

Henry 2nd other claim to fame is his establishing Canterbury as a a massive pilgrimage site after one of his tantrums resulted in the rather bloody murder  of Thomas Beckett on December 29 1170 Tom was canonised in record breaking time on 21 February 1173.

Henry and Tom  were having a bit of a barney over Church rights and as usual, property rights. Unfortunately for Henry, Thomas's death set off the Catholics in a frenzy and all of Europe was suddenly afire with devotion to the new saint. Henry was in a bit of political bother so he agreed to do a dose of penance and in the style of reality TV he had himself flogged at Thomas's tomb.As a reward for this public humiliation Henry was awarded the right to be called King of England rather than the rather pythonish King of the Britons.

History in England continued on its merry way with the usual family disputes, the odd war and the Magna Carta However a few centuries down the  track and another Second, Charles of England was chopping heads off  any peer he suspected of participation in the Popish Plot  the best of the 17th century conspiracy theories. Among those peers was William Howard, 1st Viscount Stafford who lost his head at Tower Hill on December 29 1680. Bill was beatified in 1929 and is still in line for canonization.

When I was studying for my HSC in 1970, Murder in the Cathedral by T.S. Eliot was one of the set texts on the theme of Authority and the Individual. Today's feature image is my appearance as the herald in Eliot's play. The performance was staged at St Anthony's Church Marsfield in about 1976. 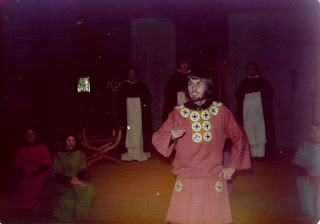 The tension between politics and religion has been one of the formative features of the Westminster model of Government that we have inherited. Our history has been played out in the theatre of controversy between the interests of the State and the Church.
Some of my earliest memories of this conflict was learning that the Irish Archbishop of Melbourne, Daniel Mannix stood in public opposition to the conscription of young men to the First World War by the Government of Billy Hughes.