A Faith Response to Military Intervention in Syria

For Christians the city of Damascus sits in our collective memory as a watershed moment of conversion and commitment to non-violence.The story of the conversion of Paul was not just a religious experience. It was a political commitment to stand against the power of Empire and walk in the steps of Jesus the peacemaker.

.Huff Post Religion Just War Doctrine and Syria Even as the world’s powers grasped for a last-minute resolution to the crisis in Syria, it remained an open question whether any amount of diplomacy could prevent the conflict from claiming at least one more victim: the classic Christian teaching known as the “just war” tradition.

Pope Calls for Day of Prayer and fasting on September 7 May the plea for peace rise up and touch the heart of everyone so that they may lay down their weapons and be let themselves be led by the desire for peace.To this end, brothers and sisters, I have decided to proclaim for the whole Church on 7 September next, the vigil of the birth of Mary, Queen of Peace, a day of fasting and prayer for peace in Syria, the Middle East, and throughout the world, and I also invite each person, including our fellow Christians, followers of other religions and all men of good will, to participate, in whatever way they can, in this initiative. 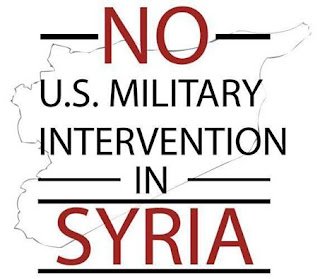 United States Conference of Catholic Bishops Take Action Now Contact your two U.S. Senators and your Representative and urge them to vote against a resolution authorizing the use of military force in Syria. Instead, ask them to support U.S. leadership, in collaboration with the international community, for an immediate ceasefire in Syria and serious, inclusive negotiations for peace.


A letter from Trappist nuns in Syria: “Blood fills our streets, our eyes, our hearts” We look at the people around us, our day workers who are all here as if suspended, stunned: “They’ve decided to attack us.” Today we went to Tartous…we felt the anger, the helplessness, the inability to formulate a sense to all this: the people trying their best to work and to live normally. You see the farmers watering their land, parents buying notebooks for the schools that are about to begin, unknowing children asking for a toy or an ice cream…you see the poor, so many of them, trying to scrape together a few coins. The streets are full of the “inner” refugees of Syria, who have come from all over to the only area left that is still relatively liveable…. You see the beauty of these hills, the smile on people’s faces, the good-natured gaze of a boy who is about to join the army and gives us the two or three peanuts he has in his pocket as a token of “togetherness”…. And then you remember that they have decided to bomb us tomorrow. … Just like that. Because “it’s time to do something,” as it is worded in the statements of the important men, who will be sipping their tea tomorrow as they watch TV to see how effective their humanitarian intervention will be….

Sojourners Keep Doomsday Religion Out of the Syrian Conflict

Ask the Judeo-Christian world: have they forgotten Mahmoud Ahmadinejad’s comment about erasing Israel from the face of the Earth? Ask the Muslim world: have they forgotten George W. Bush’s post 9/11 declaration of the war on terror being a “crusade.” Who’s to say that political decisions are immune from such eschatological yearnings? As the war engulfs Damascus, one wonders if our actions or inactions are partly motivated by religious beliefs.

Pope Francis and King of Jordan  Negotiation is the Only Option for Syria
Archbishop Maroun Lahham, patriarchal vicar for Jordan in the Latin Patriarchate of Jerusalem, told Vatican Radio the meeting of Pope Francis and King Abdullah was an opportunity for both of them to discuss ways to encourage peace in Syria “in the midst of all these threats we are hearing. With what is happening, Jordan – although it is a small country – can play an important role for peace in Syria”.

Our experience tells us that the last two decades of war have extracted a great price at home with so little to show for it. And the loss has not been just in lives and treasury, though those losses are staggering, but also in our understanding of who we are and what moral imperatives drive our decisions. In this case, the real strength may be in resisting the bully's taunt.

Thomas Reece NCR What moral theologians say about getting involved in Syria As the Obama administration prepares to respond to the use of chemical weapons in Syria, what are the ethicists saying about the morality of military intervention? In this article, I will examine their views about whether intervention in Syria fits the criteria of a just war. Links are provided to the more complete thoughts of each expert.

Pax Christi: Dialogue is the only way towards the end of the violence in Syria
Pax Christi urgently calls religious leaders – regardless of the specific community to which they belong – to use their moral authority to speak clearly and with urgency in private and in public for an end to violence; to strongly call for a political solution to the armed conflict; to support the creation of zones of non-violence; and to promote active campaigns of prayer, non-cooperation and public witness for an immediate end to the violence in Syria.

Pax Christi Syrians Need Safety Zones for Humanitarian Relief
Syria’s government, responsible for protecting the people, is not only failing to do so, but is accused of viciously attacking civilian communities, including with its substantial air force. Between the Assad government, the Free Syrian Army and the many extremist elements increasingly involved in the conflict, few people we met in Lebanon thought that a negotiated solution in the near future was possible. Instead they were predicting a long, bloody war. We heard strong voices speak against any kind of a military intervention, but for consistent, diplomatic, relief and solidarity support from other countries without self-interested geopolitical maneuvering. - See more here.

John L Allen Jnr (NCR) Syrian Christians say Western attack could make things worse "We heard a lot about democracy and freedom from the U.S. in Iraq, and we see now the results -- how the country came to be destroyed," said Chaldean Catholic Bishop Antoine Audo of Aleppo in a recent interview. "The first to lose were the Christians of Iraq."

Do something today and add your signature to the Change.org petition which calls for a Non Violent resolution of the conflict in Syria.
at September 12, 2013

My Response to Papal Call for Civil Unions