International Women's Day and the Nurturing of Faith

on March 07, 2013
This week I celebrate the 60th anniversary of my baptism.on Sunday March 8 1953. It was a long time before my I associated that date with  International Women's Day. And now as I reflect back I have a debt of gratitude to the women who nurtured my faith over the past 6 decades.

My mother's family  were typical Catholics of their era. My grandmother saw three of her children marry Catholics and her  youngest daughter join a religious congregation, the Franciscan Missionaries of Mary. From my grandmother and my mother I learnt much of the tribal loyalty that was a feature of  Irish Catholicism.

I have fond memories of my grandmother and her Legion  of Mary troupe walking the streets for home visits where we would recite the rosary gathered round the travelling "Fatima" statue.. My grandmother's house was a mini-shrine with each room featuring a larger than life icon. (My grandmother didn't call them "icons" of course, they were just part of the family along with the photos!!) In fact I don't recall any non-religious art in the house at that time. The  Infant of Prague had a special place in the kitchen where he had responsibility for the "Tatts" tickets, a custom my own mother continued.

My grandmother was a typical "pillar" of her local Church which meant that there were high expectations of her kids and especially the grandkids. I managed to  uphold the family name when at 11 years of age I correctly named every saint in our parish church windows as part of a parish centenary celebration.

Mum read widely and encouraged us as kids to do the same. As well as our membership of the local library we had a series of religious magazines that arrived at regular intervals. One of those mags was the Redemptorists Fathers publication, The Majellan. My mother was anxious not to have  my hormones disturbed too early and in my younger years I was only allowed to read the "Teen Page".

My mother who died last August was  an amazing woman of faith who took on the challenges of  a new era with the tribal loyalty she inherited. Her association with the FMMs and the Columbans  opened her eyes to the world of justice making as a constituent element of her faith. 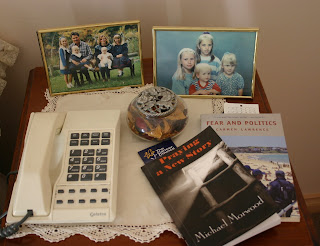 Her bookshelf included titles by Henri Nouwen, Shelia Cassidy, and Joyce Rupp. This image of my mother's bedside table was taken just before she moved from her unit into high level nursing care before her death..  In her 84th year she is willing to take on the challenging writings of people like Michael Morwood.

Outside the family connection it took a generation before I found women of real religious inspiration. Perhaps the most surprising discovery was  Mirium Therese Winter. As a young  guitarist I took on the excitement of new music being written for worship in the late 1960s and 70s.

The Medical Missionary Sisters  folksy and singable hymns broke ground with a new langaue and theological imagination. Over three decades i have followed the writings of Mirium Therese Winter as she introduced me to  feminist perspectives both in word and song.

In the 1980s I worked in the Collingwood Parish with the  Angel of Collingwwod, Margaret Oates.  Margaret mentored me into social work with compassion and amazing generosity. Her legacy continues with a soup van named after her, but more important are a generation of  middle aged women who will remember the support they received as young girls living in the  streets and high rise units on inner city Melbourne.

At the same time I discovered the words and work of Dorothy Day and began  my journey into a commitment to nonviolence. Locally the life and mission of 'Mum Shirl" inspired and enthused a new relationship with indigenous people.

In recent years I have also discovered the rich spirituality of art in the work of Janet McKenzie and the wonderful nurturing of the imagination with Sr Wendy Beckett.

Among my favourite books I count  The Flowering of the Soul A book of Prayers For Women by Lucinda Vardey, the works of Jean Housten and the haunting text and sounds of Hildegard von Bingen.

One women I really want to honour on this anniversary is  Bernice  Johnson.Reagon. Twice in my life I have been spellbound by the live performance of Sweet Honey in the Rock, the a cappella ensemble Bernice founded in 1973.  "We Are" remains for me one of the great anthems of our time that deserves to be heard and sung in churches, parks, homes, workplaces, streets and wherever people gather.