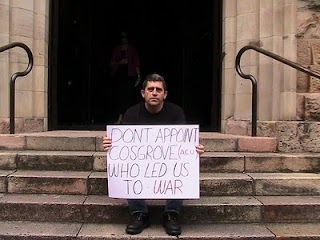 You know you are getting to people by the number of responses you get to a Facebook post.

A post announcing my support for the objections to the inauguration of former General Peter Cosgrove as Chancellor of theAustralian Catholic University indicated that the day would not be one of "rest".

The Catholic Worker Movement organised protests at the Catholic Cathedrals in Sydney and Brisbane to raise awareness of the issues surrounding this appointment. Read Jim Dodrill’s statement . Watch Sean O'Reilly's video clip about the protest.

The Catholic Worker Movement claims Peter Cosgrove should be one of the last people to be given such a position, after he clearly ignored Papal appeals and the declaration of his own bishops in 2003, by leading Australian forces into a bloody and immoral invasion of Iraq.I stand by them on this one as well!

“Where is the intellectual honesty in appointing such a person to lead the Catholic Universities?”, asked Catholic Worker Sean O’Reilly.(pictured above) “Peter Cosgrove demonstrated clearly that when it comes to war, he has ‘No King but Caesar’. He ignored the pleadings of the Pope, and the declaration of Australian Catholic bishops that this was not a just war."

In an interview with the ABC News Cosgrove stated "I wasn't particularly conscious that the church was taking a very strong position". It's hard to believe that the then Defense Chief was not aware of public opposition to the War from the Vatican and the Australian Catholic Bishops. How well informed is the man who has just been inauguirated as Chancellor of Australian Catholic University?

Sean said: “One worries about the militarisation of Catholic schools and institutions when the ACU appoints a General as it’s Chancellor, and not just any general, but one who made a mockery of the Church’s Just War teaching.”

One of my Facebook friends was more concerned about Peter Cosgrove's lack of serious academic credentials than military background. Another journalist friend noted that Cosgrove is seen by many in Timor Leste as a peacemaker. Sadly, his local reputation as a "folk hero" is dwarfed by his shameful military participation in Afghanistan and Iraq.

You can voice your concerns about the appointment of General Peter Cosgrove as ACU Chancellor by contacting the members of the Senate of the Australian Catholic University. See this link for contact.